It’s not quite September anymore, but I figured the September #SWDChallenge would be a good way for me to practice evaluating a visualization and remaking it! The challenge contains several useful tips for evaluating graphs, as well as some questions to consider when thinking about the remake.

I will be learning how to use Tableau for this challenge.

This is the original graph: 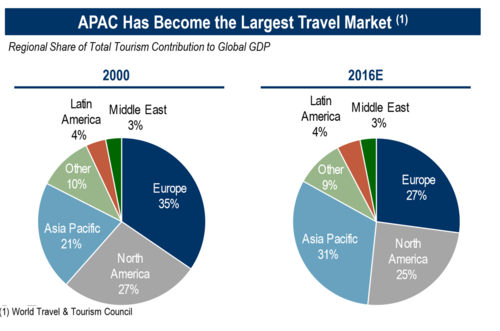 The original chart’s data was sourced from the World Travel & Tourism Council. Their website includes a tool that generates interactive visualizations, and more importantly, provides absolute numbers. The numbers below are listed as nominal(real) in billions of USD.

While I originally wanted to emphasize both Asia Pacific’s increase and Europe’s decrease in percentage points, I realize that highlighting the latter would be misleading. Rather than portraying a decrease in Europe’s contribution, the focus should be on the original title: that Asia Pacific has become the world’s largest travel market.

I know that I want to highlight Asia Pacific’s change between 2000 and 2016. Tableau quickly generates basic visualizations, and after messing around with stacked bar charts and line charts, I think a slopegraph would be most appropriate.

I imagine that this graph would be placed alongside more detailed information on global travel markets, and serves only as a cursory overview of a longer discussion on the growth of Asia Pacific’s travel industry. The original pie chart If I had more consistent numbers, I would have placed them alongside the slope graph to give more context at a glance. This slopegraph still gives the impression that the travel industries of Europe and North America are declining, however. This issue can be solved either by accompanying text, or by including the absolute numbers in the graph.

This makeover by Kat Greenbrook is super informative! Plus the animation is nicely done.

This tutorial on slopegraphs was very helpful!